Jeff Bezos gave some advice and did a little bragging on Twitter about his accomplishments last night (October 10). The tweet from the second richest man in the world got a response from Elon Musk, whose net worth lead over Bezos is growing. The advice in the post, just minutes before Columbus Day, seems to fit. It recognized the power of going against naysayers and believing in oneself. As for Elon Musk’s reply to Bezos, well, I guess this is how two men that own rocket ships communicate.

In 1999 the business weekly, Barron’s wrote a story on Amazon’s business and featured it on the cover of their magazine. The story was titled, “Amazon.bomb” it predicted the demise of the online store while dismissing Bezos by saying, “The idea that Amazon CEO Jeff Bezos has pioneered a new business paradigm is silly. ” Twenty-two and a half years later, the person many predicted was sailing off in the wrong direction, is worth $1.6 trillion, owns a more successful publication than Barron’s, and is sending people into space.

It isn’t clear if his tweet was related to Christopher Columbus who also could have failed had he not ignored naysayers, let go of what was the standard route to success, and instead found people that believed in him. The Bezos tweet reads: “Listen and be open, but don’t let anybody tell you who you are. This was just one of the many stories telling us all the ways we were going to fail. Today, Amazon is one of the world’s most successful companies and has revolutionized two entirely different industries.” 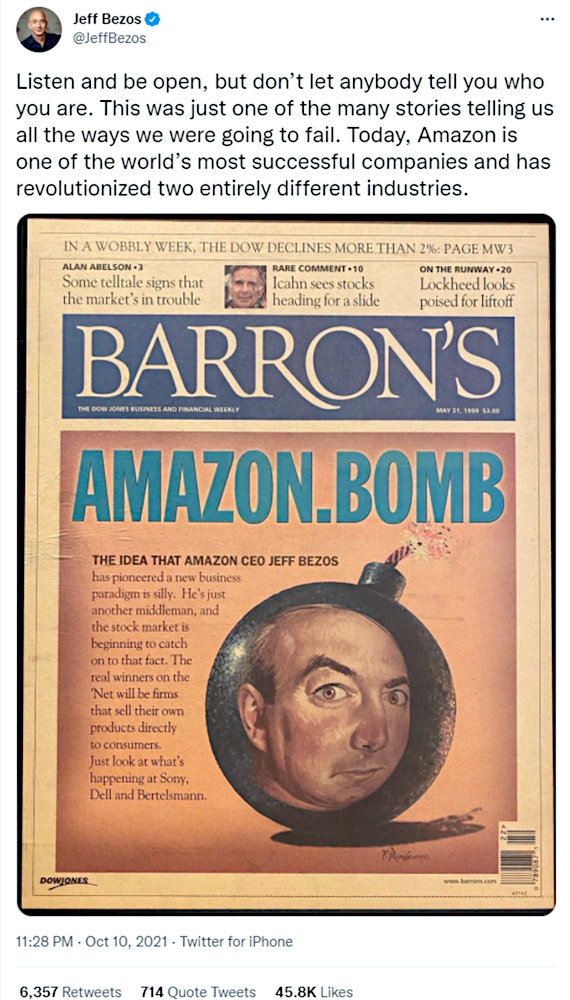 Famous for his short, impactful Twitter posts and replies, Elon Musk responded with a simple emoji of a Second Place Silver Medal emoji. This “poke” collected 20,000 more “Likes” than the original post.  A few days earlier a major news outlet published an article showing how Elon Musk, has overtaken Bezos as the richest person and how he’s widening the gap.

Musk and Bezos compete on several frontiers, including self-driving cars and space exploration. The competitiveness of the two and the nudge and poke we woke up to on Twitter this morning is perhaps one way the ultra-successful keep themselves motivated.

If Christopher Columbus had access to Twitter in the early 1500s, would he have highlighted his success and given advice about listening to others while ignoring the naysayers? Would Amerigo Vespucci have tweeted back a map with two continents named after himself? We’ll obviously never know, but we know we can be grateful for so many who didn’t just follow others and instead went against criticism and found success.

Onconova Therapeutics, Inc. (NASDAQ: ONTX), a clinical-stage biopharmaceutical company focused on discovering and developing novel products for patients with cancer, today announced that it will participate in the MedInvest Oncology...
0
2 min read
‌
12/7/2022
Retail and Consumer

CoreCivic, Inc. (NYSE: CXW) (CoreCivic or the Company) announced today it received notice from the California Department of Corrections and Rehabilitation (CDCR) of its intent to terminate the lease agreement...
0
4 min read