Vancouver, Canada, December 2, 2021 – CanAlaska Uranium Ltd. (TSX-V: CVV; OTCQB: CVVUF; Frankfurt: DH7N) (“CanAlaska” or the “Company”) is pleased to announce joint venture drilling by (“JV”) partner Denison Mines Corp. (“Denison”) has intersected uranium mineralization in drillholes MS-21-02 and MS-21-06 at the Moon Lake South JV project. MS-21-02 intersected 0.14% eU3O8 over 0.2 metres above the unconformity and MS-21-06 intersected 0.12% eU3O8 over 0.2 metres below the unconformity. Denison operates the JV project, while CanAlaska, which maintains a 25% ownership in the project, is funding the Company’s share of the 2021 exploration program. 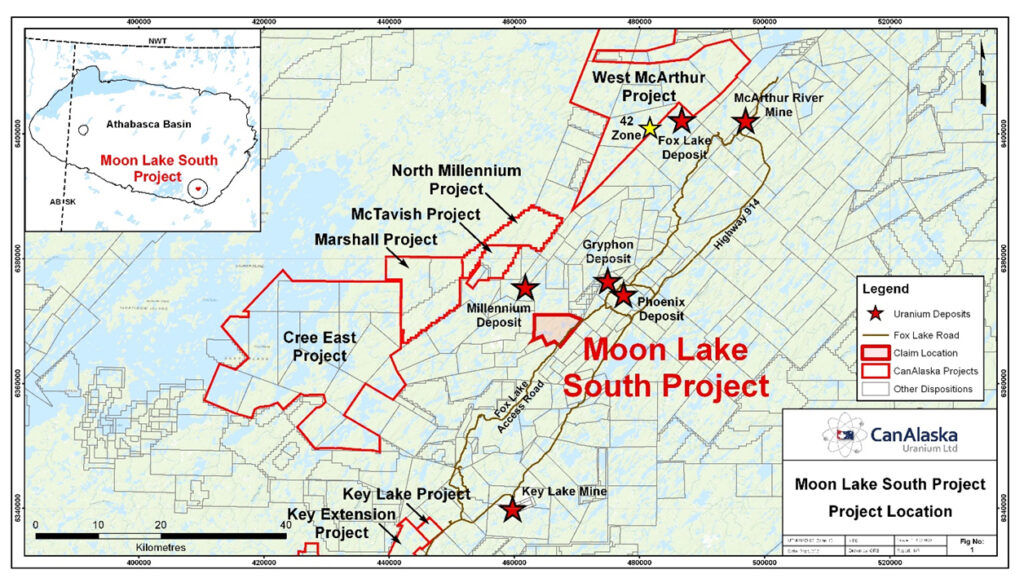 The 2021 drilling program was focused on a 5-kilometre long conductive corridor known as the CR-3 conductor (Figure 2). This mineralized corridor is located approximately two kilometres west of the K-trend, host to the Gryphon Deposit on Denison’s adjacent Wheeler River property. The 2021 drilling program consisted of 2,353 metres in four drillholes that successfully reached the target depth.

In 2016, as part of the project option from CanAlaska, Denison drilled one diamond drillhole (MS-16-01) near the southern boundary of the Moon Lake South project.  The drillhole identified the first new zone of mineralization on the CR3 corridor, with an intersection of fractured and friable sandstone with uranium mineralization immediately at the unconformity (0.1% U3O8 over 0.5 metres). 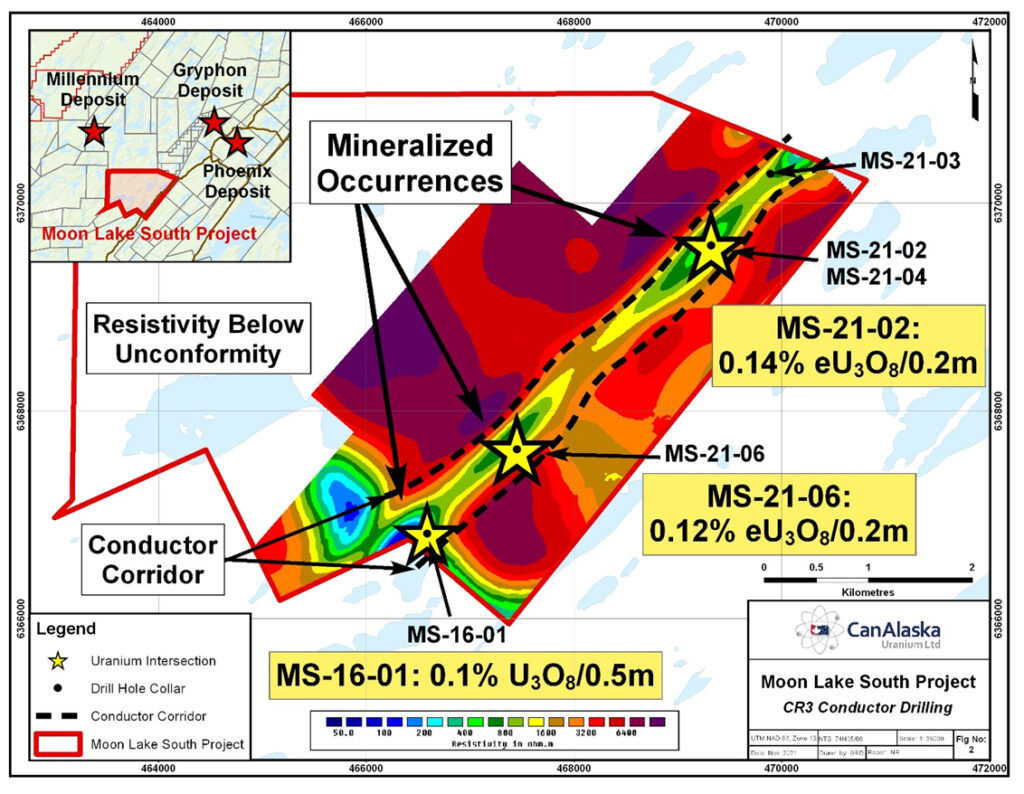 The first drillhole of the 2021 program, MS-21-02, tested a further target on the CR3 conductor approximately 4 kilometres north of mineralized drillhole MS-16-01. This new drillhole intersected grey sooty pyrite alteration in the lower sandstone column associated with a new zone of fracture-controlled uranium mineralization grading 0.14% eU3O8 over 0.2 metres immediately above the unconformity from 488.5 – 488.7 metres. Below the unconformity, two graphitic packages were intersected with several re-activated fault zones characterized by clay gouge, brecciation, and broken core.  Drillhole MS-21-02 was drilled at an azimuth of 302? with a  dip of -79.4?.

Drillhole MS-21-04, collared at the same location as MS-21-02 at an azimuth of 302? with a  dip of -70.5?, tested 70 metres northwest on section of MS-21-02 and intersected the up-dip projection of the basement faults from MS-21-02 in the lower sandstone column. The faults are characterized by desilicification and localized weak sooty pyrite in the sandstone, and bleaching, clay gouge, and localized clay replacement in the basement. There are 10 metres of unconformity elevation offset between the drillholes. The sandstone offset is interpreted to be related to reverse movement along the graphitic faults in the basement. The main structure causing this unconformity offset is a high-priority target for follow-up.

The last drillhole of the program, MS-21-06 tested the conductor approximately 1.2 kilometres north of mineralized drillhole MS-16-01 and 2.7 kilometres south of mineralized drillhole MS-21-02.  The new hole intersected basement-hosted uranium mineralization grading 0.12% eU3O8 over 0.2 metres from 550.6 – 550.8 metres. MS-21-06 was drilled at an azimuth of 302? with a  dip of -75?. The basement of MS-21-06 consists of an 18-metre wide graphitic pelite that contains a 3 metre wide altered fault zone, followed by granite with a narrow grey quartz-rich pegmatite that hosts the uranium mineralization. The ideal target on this fence, where the graphitic basement with the altered fault zone contacts the unconformity, remains untested.

Drillhole MS-21-03, drilled at an azimuth of 302? with a  dip of -74?, is located 900 metres along strike to the northeast of mineralized drillhole MS-21-02. MS-21-03 intersected a 25-metre wide graphitic package 20 metres below the unconformity that contains a fault zone with one metre of associated clay gouge. The ideal unconformity target lies approximately 50 metres northwest and has yet to be tested on this fence.

CanAlaska CEO, Cory Belyk, comments, “This is an incredible result for the new Moon Lake South JV and CanAlaska shareholders. The first drilling program under the new JV with Denison has located the main structure and intersected more uranium mineralization. Multiple uranium showings have now been discovered on this project, and the Company looks forward to the next phase of exploration to further build upon this success.”

Use of Radiometric Equivalent Grades

During active exploration programs, following the completion of a drillhole, the hole is radiometrically logged using a calibrated downhole total gamma probe. Preliminary radiometric equivalent uranium grades (“eU3O8”) are then calculated using the downhole radiometric results from the calibrated gamma probe. A 0.1% eU3O8 cut-off is used for compositing and reporting the data. Equivalent uranium grades are subsequently reported as definitive assay grades following sampling and chemical analysis of the mineralized drill core. In the case where core recovery within a mineralized intersection is less than 80%, radiometric grades are considered to be more representative of the mineralized intersection and may be reported in the place of assay grades. For results from Moon Lake South, Denison has performed detailed QAQC and data verification, where possible, of all datasets. CanAlaska has performed additional QAQC and data verification of the drilling data, including review of the QAQC methods and review of downhole probe and equivalent uranium grade calculation.

The Company has recently terminated a Letter of Intent (“LOI”) that was signed 3 September, 2021 with Terra Uranium Pty Ltd. for an option to earn 20% interest in CanAlaska’s 100%-owned Waterbury South project near the Cigar Lake uranium mine. Negotiations under the LOIs on the Waterbury East and McTavish projects, also with Terra Uranium Pty Ltd., are still active and are anticipated to be concluded shortly.

On behalf of the Board of Directors

Release – Kelly to Participate in the Sidoti Virtual Investor Conference