Blank check company Digital World Acquisition Group ($DWACU, $DWAC) stock has moved up sharply after the announcement that they will merge with a new entrant to the digital media world, Trump Media & Technology Group (TMTG). Trump Media released a statement that its mission is to “create a rival to the liberal media consortium and fight back against the ‘Big Tech’ companies of Silicon Valley, which have used their unilateral power to silence opposing voices in America.”

The Special Acquisition Corp (SPAC) merger announcement comes at a time when FTC antitrust suits have been filed against big tech companies like Facebook and Google. TMTG plans to launch a social-media platform backed by the former President called TRUTH Social. It will be available for select guests in November with nationwide registration available during the first quarter of 2022. The plan is to rival the Facebook ($FB) and Twitter ($TWTR) platforms.

The de-SPAC merger is pending shareholder approval. The venture is valued at $875 million including debt, TMTG said in a release. The SPAC currently has $293 million in trust which it will use to fund Trump Media’s initial growth plans, said Digital World Chief Executive Patrick Orlando. 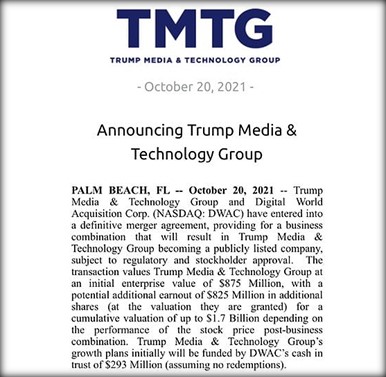 Trump Media also plans a subscription, video-on-demand service, called TMTG+, featuring “non-woke” programming to rival Netflix (NFLX) and Disney+ streaming services, according to a slide deck on the company’s website. The company also will roll out podcasts and news services to rival CNN and iHeart Media, according to the deck. An information web page inviting initial users for TRUTH Social’s beta launch describes the platform as “America’s ‘Big Tent’ social media platform that encourages an open, free, and honest global conversation without discriminating against political ideology.”

Within two hours after the stock market opened the day after the announcement, the SPAC was trading at twice the opening price. The ex-president said in a statement that he is “excited to send out my first TRUTH on TRUTH Social very soon.”

Paper Hands and the IRS

Calling someone “paper hands” is common in online trading communities such as r/wallstreetbets. It borders on a bullying tactic to encourage others on the platform to remain in stocks that...
0
4 min read
‌
9/23/2022
Energy

InPlay Oil Corp. (TSX: IPO) (OTCQX: IPOOF) (“InPlay” or the “Company”) is pleased to announce that it has published its inaugural sustainability report (the “Sustainability Report”) which can be accessed...
0
4 min read
‌
9/23/2022
Health

Study Supports Use of TNX102-SL in Long COVID Symptoms. Tonix presented a large, retrospective study to determine the incidence of symptoms in patients with Long COVID (PASC, or Post-Acute...
0
3 min read
‌
9/23/2022
Industrials

Meeting. We had the opportunity to sit down with new CEO Travis Boone and new CFO Scott Thanisch to discuss their early impression of Orion, the near-term game plan, and...
0
2 min read