Does Michael Burry Have a Problem with John Maynard Keynes?

There is no doubt that Dr. Michael J. Burry is familiar with Keynesian economics theory. Under the theory, the government should help control aggregate demand by infusing money into a weakening economy to create added demand or withdraw currency to reduce demand. But there is a caveat to this basic tenet of Keynes’ theory, and it seems Michael Burry, famous hedge fund manager at Scion Asset Management, has little patience for it.

Followers, both fans and haters, pay close attention to the tweets the Scion Asset Management founder often uses to share his thoughts. Burry’s tweets are usually deleted by him shortly after he sends to keep BOT benefactors down. So his Twitter account isn’t always the best place to see his thinking that is more than a few hours old.

What is Michael Burry is Saying

Burry’s recent tweets have indicated he believes retailers could cut prices to rid themselves of inventories caused by seasonal delivery inventory mismatches. Also, dwindling savings and soaring debt could spark a recession. He just offered more proof of his theory.

At about 4 am this morning (presumed Pacific time), Burry posted a Bloomberg chart on U.S. consumer credit use. The graph reaches back to 1991 and carries into the recent monetary policy tightening. Along with the chart, Burry tweeted, “Net consumer credit balances are rising at record rates as consumers choose violence rather than cut back on spending in the face of inflation. Remember the savings problem? No more. COVID helicopter cash taught people to spend again, and it’s addictive. Winter coming. 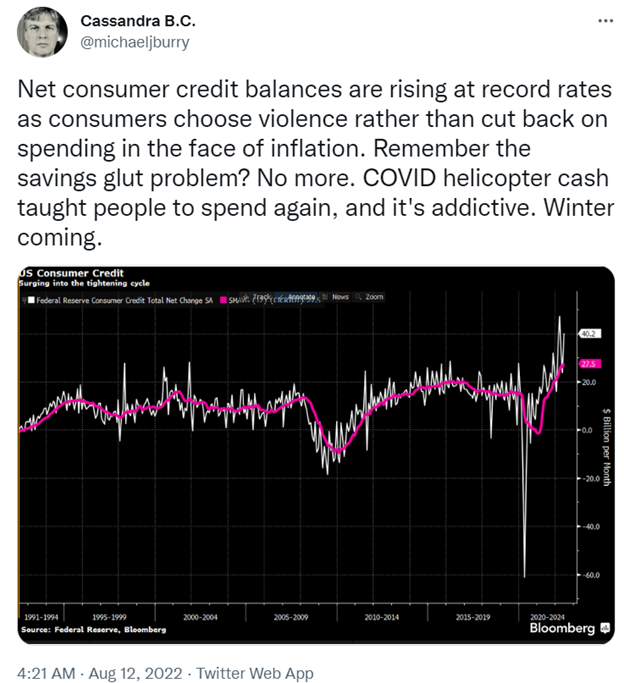 When speaking of economic cycles, “winter” is often referred to as the downside of the cycle; there is death and dormancy among businesses in the winter. It’s miserable, but it leads to the spring part of the cycle with new growth.  Translating further, if the consumers continue to buy, despite having an unsustainable ability to continue at the previous pace, a more violent winter may fall upon the economy.

The chart attached to the tweet shows the net change of consumer debt each month as recorded by the Federal Reserve. The historical average, including negative periods, is $27.5 billion.  The current monthly pace is $27.5 billion.

Burry noted in May that American consumers, faced with rising food, fuel, and housing costs, were pulling from their incomes, racking up credit-card debt, and poised to virtually exhaust their savings by the end of 2022.

Keynesian economic theory says the government should help free markets when they are faltering by injecting cash. The cash will then spur aggregate demand for goods and services. And the government should also pull money from the system to reduce demand in an overheated situation. Having a smoothing hand, in addition to the free market’s invisible hand, could lead to a more balanced outcome and a more even keel.

The theory also recognizes that if additional money is put into consumers’ hands today that it works its way into the economy quickly. The U.S. experienced this a couple of years ago with stimulus checks that began stimulating right after being announced – even before distribution. However, if money is removed from the system, spending continues at the same pace for a while as consumer spending habits don’t back off the consumption gas pedal as quickly.

Most consumers are no longer receiving benefits doled out through the pandemic and are now confronted with rampant inflation. Yet, despite worsening cash flow and higher prices, they are consuming at the same level, making up the difference by pulling from savings and increasing debt. This is right in line with what John Maynard Keynes would expect. At least at the beginning.

Keynes would also expect a turn to more conservative spending eventually, currently, consumer tapering on spending is just beginning. And based on his theory, it will be followed by a reduction in consumption.

Is Burry at Odds with Keynes?

The short answer is what Burry has been bringing to investors’ attention is right in line with what Keynes, in 1936,  said could be expected. Apparently, human nature related to consumption hasn’t evolved.

I am sure Dr. Burry understands that reactions when it comes to cutting back aren’t immediate. But what may frustrate him is that the markets (not the consumer) always take so long to spot what he is seeing. He has a habit of getting into trades much earlier than others. His expectations, more often than most, play out as he expects, with one exception. The exception is timing. Even in his famous “big short” of the mortgage market, he was a couple of years ahead on his credit default swap play. One can presume that he felt a good deal of pain as housing continued on its path for much longer than expected.

The central bank has to be out ahead of the economy when the pace is heating up because taking the proverbial “punch bowl” away doesn’t cause immediate sobriety. Burry predicted consumer spending would drop as a result of tightening and believes retailers will cut prices to lessen overstocking and badly timed inventories. This would help derail inflation and put pressure on retail and other earnings by Christmas. The tweeted chart of consumer debt above shows the “party” is still raging as the government-supplied punch bowl has been removed, but people are tapering by using their limited stash. When that stash taps out, there will be an abrupt end.

Earlier this week he tweeted about the turnaround in the stock market, specifically Nasdaq. He warned that the big-tech heavy index may be 20% off its low, but history indicates that this doesn’t mean that it can’t fall dramatically as it did seven times after 2000 when the dot-com bubble burst. 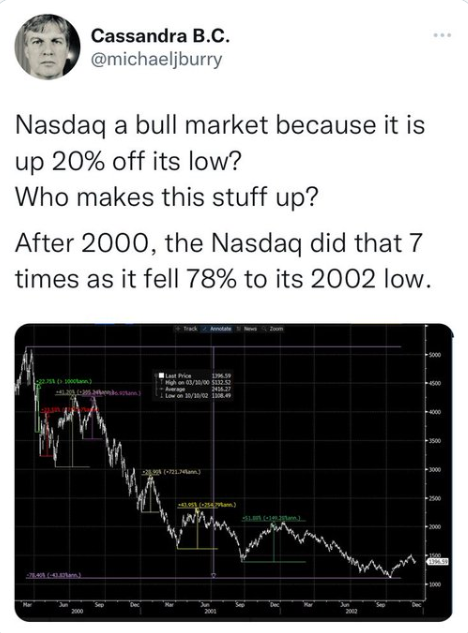 Frustration is a common theme of his tweets. Some of the frustration is a lack of patience for things like the nuances of Keynesian economics and the overall behavioral patterns of investors across many asset classes.

Burry He also has asserted the pain for investors might not end until they swear off owning tech stocks, cryptocurrencies, and non-fungible tokens (NFTs). Referring to the latest w/streetbets “meme-stock” additions AMTD (HKD) (which rose 21,000%) and Magic Empire (MEGL) (which rose 2,000%) he recently complained that market “silliness” is back after the two IPOs skyrocketed. 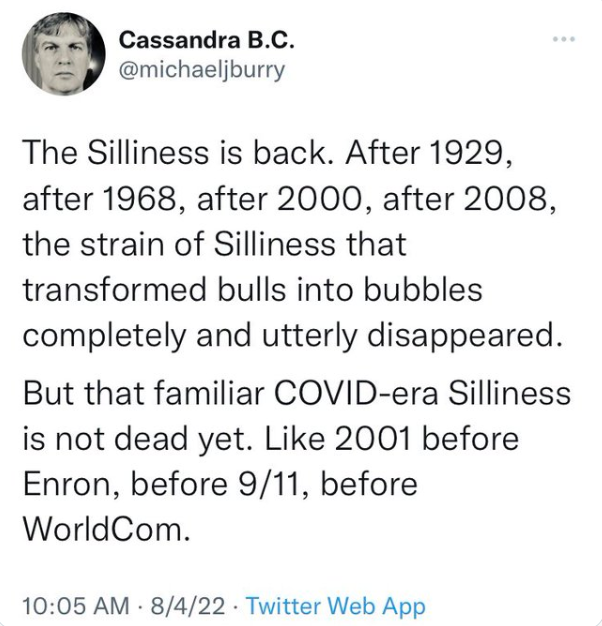 An investor can be consistently right about the future direction of individual stocks or the markets. If they perceive what is going to happen to be timed much sooner than the other players, they will miss other opportunities, or more frustrating, lose patience with the position and get out of it before it becomes profitable.

In the book about Michale Burry’s housing crisis position, it took a long time for what he was certain to happen, to become reality. He lost a lot of investors in his funds while waiting for what he believed to be inevitable, played out. Classic economic theory tells us that we should expect delays in cause and effect. As investors, we need to remind ourselves if we are long-term and willing to ride out the ups and downs to stick to the plan. Or if we are more active, we may try to take advantage of shorter moves that may be against our overall thoughts on the long-term direction.

The Week Ahead – Volatile Oil Prices, A Less Hawkish Fed, and U.S. Productivity

On Sunday, OPEC+ voted to maintain the previous level of output. This is known in OPEC vernacular as a “rollover,” it will allow the group time to experience and assess...
0
5 min read
‌
12/2/2022
Health

InPlay Oil Corp. (TSX: IPO) (OTCQX: IPOOF) (“InPlay” or the “Company”) is pleased to confirm that its Board of Directors has declared a monthly cash dividend of $0.015 per common share payable on December...
0
2 min read